Sophie AUBERT,  from France to Shangai-China 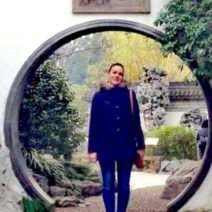 Expatriate in China, with the Master Food Identity in my suitcases… In February 2017, my partner and I decided to leave Switzerland to move to Shanghai. I do not know Asia, I never work on site, I do not speak Chinese and my knowledge of Chinese Gastronomy is limited to an “Asian” restaurant in Paris: the change of scenery is total.

First discovery: “Chinese cuisine” is like speaking generally of “European cooking” by including each of its countries, it does not have much sense. The cuisines of each region are distinguished by their flavors, products, methods of preparation and traditions. The Chinese are very proud of their 5000 years of history, and their rich culture is reflected in the gastronomy. According to a statistical study, among the 8 major regional cuisines of China, there are more than 60,000 different dishes!

So I started learning Chinese at the University, and observed the eating habits of the Shanghai locals. Despite the disproportionate size of the megalopolis – 24 million inhabitants – and the unimaginable number of supermarkets (whose leader is Carrefour), the Chinese go every day to small local shops and markets to buy their fresh produces. I discover unknown fruits and vegetables, meat products and strange fish and hundreds of spices whose name and flavor I do not know.

Shanghai, located by East China Sea and whose region is furrowed with rivers, is famous for its very sweet cuisine, without spices. At every street corner you can taste steamed dumplings, filled bread rolls, cookies, teas, tofu and hundreds of other specialties.

Shanghai – which hosts some 200,000 expatriates – is also known for the diversity of its restoration. The incredible cultural mix has allowed the development of a great gastronomic offer. Among its specialties, French cuisine is very popular and increasingly appreciated by the Chinese consumer, especially among young people who consume French is very chic. China is also beginning to recognize certain appellations of origin among European products, but imitations are still numerous.

What about Food Identity program in Shanghai?

Quickly, I became aware of the richness and uniqueness of expertise provided by the Master Food Identity in Shanghai. Whether in the areas of production, quality, marketing or sales, the skills I acquired during this training are sought. The motto “Thinking Local, Going Global” is meaningful here, and I am sure that every Food Identity alumni who wishes to move to Asia will find a special place in the world of local food products.