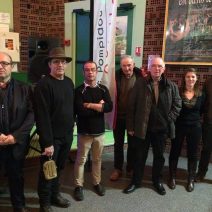 “I’m Lise Pelux, I have followed the Master Food Identity program from 2012 to 2014. After a few weeks of job research, I was hired in a wine company, in the Jura department (France). I worked on selling wine and making cellar tours for French and foreigners. I had already worked there for a summer job. I think Food Identity program helped me to get this job, because of the courses (particularly food and wine tasting) as well as the English courses. I also appreciated the fact of having a lot of company visits during the program, it helped me organise my tours.

After almost one year, I decided to change my job. I was looking for something linked to traditional products and I was hired at Limousin Promotion in 2015. The goal of this association is to protect and promote specific Label Rouge meat from the French region: Le Limousin. There, along the French roads, I had to promote the Limousin Label Rouge meat with all stakeholders, from breeders to the butchers. Knowledge gained during master courses was very useful for this job.

Recently in December 2017, I’m working in an agricultural high school. I manage a “dairy and a meat processing” factory where production is conducted by employees and students.

Thanks to this master’s degree I was able to work on these different sectors and for different contexts (selling, promotion, control, production, management). It gives us not only knowledge but also adaptability and an open mind.”